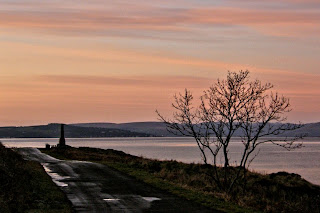 Tomont End at the north point of the Island is a monument which was erected for two midshipmen from HMS Shearwater who drowned nearby .

The inscription on the monument is very difficult to read due to weathering,but local historians tell us that the inscription reads.

"To the Memory of Mr. Charles D. Cayley,
aged 17 years
and
Mr. William N. Jewall,
aged 19 years,
Midshipmen of H.M.S. 'Shearwater'.
Promising young officers,
drowned in the upsetting of their boat near this place,
17 May, 1844.

This Monument is erected in token of their worth by:
Captain Robinson and Officers of the above named vessel."

Email ThisBlogThis!Share to TwitterShare to FacebookShare to Pinterest
Labels: Buildings

I've never been to this part of the island. This is very interesting Gerry, though sad too. It's good that these lads were commemorated in this way.