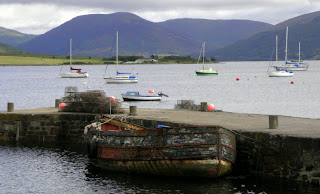 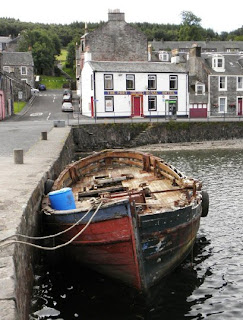 Port Bannatyne started in 1801 with the building of a small harbour on Kames Bay. It was created by the Bannatynes of Kames as a planned village in an attempt to rival Rothesay. Initially known as Kamesburgh, by the mid 1800s steamers were calling there regularly.
In 1860 the Marquess of Bute purchased this part of the island and renamed the village Port Bannatyne in honour of the long historical association of the Bannatyne family with the area and the nearby Kames Castle, which lies on the western outskirts of the village.
In 1879 a narrow gauge horse drawn tram linked Port Bannatyne with Rothesay. This was electrified and extended across the island to Ettrick Bay in 1902.
In the Second World War midget submarines exercised in the bay and nearby Loch Striven.
Port Bannatyne developed into the 1900s as a quieter alternative to Rothesay.
Boat building became an important local industry.
Thanks to Wikipedia for some of the information.