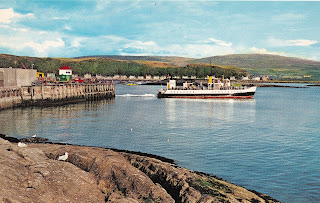 MV Keppel  was built to serve on the short passenger ferry crossing from Tilbury to Gravesend on the River Thames in England in 1961,she was originally named Rose.

She sailed from Largs to Millport from 1967 to 1992 when she was then sold and became a tour boat in Malta.

Email ThisBlogThis!Share to TwitterShare to FacebookShare to Pinterest
Labels: Ferry, Old Postcards and memorabilia of the Clyde