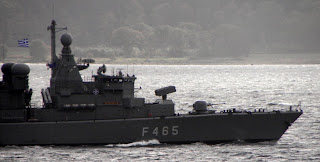 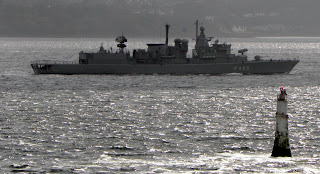 HS Themistocles f-465 Greek frigate passing the Gantocks.
The Kortenaer class was a class of frigates of the Royal Netherlands Navy. They were built to be a general purpose frigate; able to combat all surface, submarine and aircraft targets. Like some of the other frigates of the 1970s and 1980s, they featured a COGOG (Combined gas or gas) propulsion system. Ten were built by de Schelde in Flushing and two by Wilton-Fijenoord in Schiedam between 1978 and 1982. Only 10 served with the Royal Netherlands Navy: two were sold to Greece while still under construction and replaced by two Jacob van Heemskerck class frigates which are basically an AAW variant of the Kortenaer class. The Greek frigates were renamed the Elli class.
Posted by Gerard Ward at 00:03