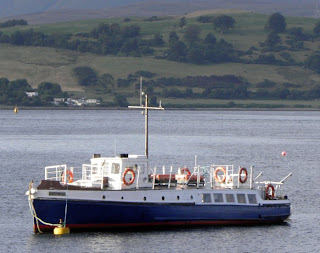 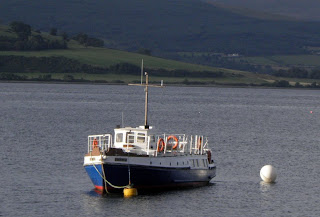 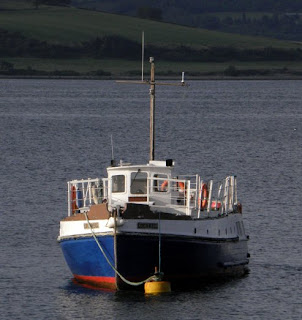 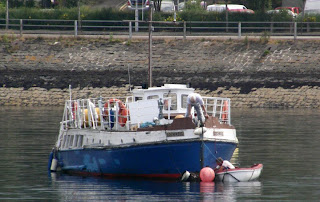 The new mail contract of 3rd June 1947 bound David MacBrayne Ltd to providing a new twice-daily service by motor launch between Oban and the pleasant little island of Lismore. Accordingly the Company had acquired in December 1946 the former hospital launch Galen, built in 1941 under the auspices of Glasgow Corporation (acting for the Port Health Authority) to ferry stretchered patients ashore from ships in the Clyde anchorage. The craft had a cabin, naturally, and was carvel-built, with two watertight bulkheads and a transom stern.

She was renamed LOCHNELL and took up the Lismore service on 30th June 1947. Initially she could carry 25 passengers in summer and twelve in winter. At first her hull was blacl; then light blue; then dark blue with red boot-topping. Nor did LOCHNELL have a funnel; exhaust gases vented through her sides.

She proved a reliable little ship and the new, steady service to Lismore was much appreciated. She was normally relieved by one of the open “red boats” stationed at Iona. In 1958 LOCHNELL was re-engined, and in 1965 she traded stations with LOCH TOSCAIG, assuming the Kyle of Lochalsh-Applecross service as well as a regular morning cruise, and also the thrice-weekly mail run to Kylrhea in place of APPLECROSS.

In May 1968 LOCHNELL was transferred again, to the Tobermory-Mingary run in succession to LOCHBUIE, and on this she spent the rest of her MacBrayne career, being relieved by assorted chartered launches. On 1st January 1973 she was not transferred to Caedonian MacBrayne Holdings Ltd and remained registered to David MacBrayne Ltd.

From 1976 she also started tendering to IONA at Tobermory, the car ferry at that time being the normal winter vessel for Coll and Tiree.

The passenger-only route to Mingary became an increasing embnrassment to CalMac and in 1980 they successfully negotiated to reduce it to a summer-only service. LOCHNELL retired on 7th March 1981, giving way to the launch STAFFA and retreating to lay-up at Shandon. She was sold to TBJ Marine Ltd of Dumbarton and handed over on 10th June, 1981, and has since had a variety of private owners
Information courtesy of ships of calmac.
Posted by Gerard Ward at 23:49