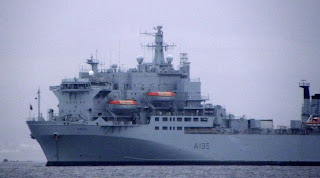 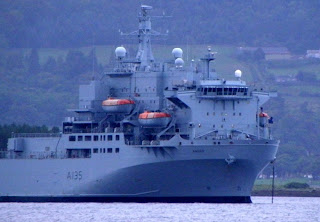 RFA Argus (A135) is an aviation training ship with a secondary role of primary casualty receiving ship in the Royal Fleet Auxiliary. Italian-built, Argus was formerly the container ship MV Contender Bezant. The ship was requisitioned in 1982 for service in the Falklands War and purchased outright in 1984.
After a four year conversion at Harland and Wolff in Belfast the ship entered RFA service in 1988. Having been initially designed as a container ship, her stability when unloaded would be excessive making her motion at sea uncomfortable or even dangerous. Therefore, her superstructure is deliberately heavily built (weighing some 800 tons), and she has 1,800 tons of concrete ballast carried in former hatch covers, which have been inverted to form tray-like structures .
Being a former container ship, Argus does not have a traditional aircraft carrier layout - the ship's superstructure is located forward, with a long flight deck aft. The ship has a small secondary superstructure approximately 2/3 of the way down the flight deck, containing the ship's exhaust funnel. This is used by small helicopters to simulate landing on the flight deck of a destroyer or frigate.
Argus was fitted with a fully functional hospital for the 1991 Gulf crisis, which has since been added to, providing 100 beds. It is equipped with the best of equipment: x-ray facilities, CAT scanner, ITU ward etc. Casualties can be quickly transferred from the deck directly into the assessment area. In recent conflicts, the ship's role as a Primary Casualty Receiving Ship (referred to as such rather than a hospital ship as the vessel is armed, thus not meeting the Geneva Convention definition of a hospital ship) has been more prominent than its aviation training duties.
In 2007 the ship was refitted with upgraded hospital facilities (replacing the forward aircraft lift with a ramp for emergency exit for hospital trollies and patients as well as two 50-man passenger lifts that lead to a new structure erected on the flight deck), generators and aviation systems (the ship is due to receive an upgrade to its night-vision capabilities enabling the use of AH-64 Apache helicopters) to give an operational life until 2020.
Argus entered service with the RFA in 1988, replacing RFA Engadine in the aviation training role. The ship deployed to the Persian Gulf in 1991 for service in the Gulf War, and also saw service in the Adriatic in 1993 and 1999 supporting British operations in Bosnia and over Kosovo respectively. During this period, Argus operated in part as an LPH. Her unsuitability for this role was a major factor in the commissioning of HMS Ocean. In 2003 Argus was deployed again to the Gulf as part of a 33 ship fleet to support a British amphibious assault of the Al-Faw Peninsula. Argus operated in its PCRS role.
In 2008 she deployed to the Middle East to act as a platform for Sea King ASaCs7 helicopters.
A program to replace Argus called the Joint Casualty Treatment Ship (JCTS) was put on hold in December 2001 after passing initial approval. The Integrated Project Team (IPT) managing the project was subsequently disbanded in 2005. The ship was most recently stationed in's home port is Falmouth in Cornwall England although being an RFA ship means that she also uses the former naval dockyard in Portland in Dorset England.
During times of war RFA Argus acts as a floating hospital with two full wards and mortuary. The last time the hospital was utilised in this way was off the coast of Freetown in 2000-01, in support of British operations against the rebel West Side Boys.
Information courtesy of Wikipedia.
Posted by Gerard Ward at 00:02