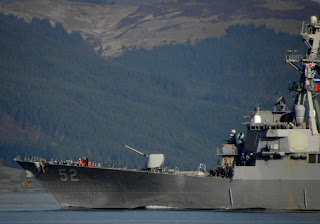 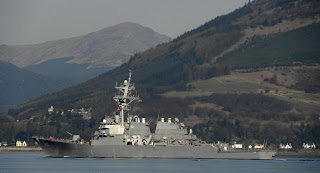 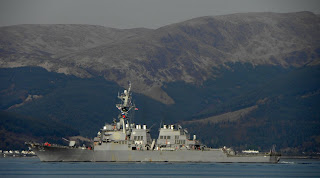 USS Barry (DDG-52) is an Arleigh Burke-class guided missile destroyer, commissioned in 1992. Built by Ingalls Shipbuilding in Pascagoula, Mississippi, Barry is homeported at Naval Station Norfolk, Virginia.
Barry is named after the "Father of the American Navy", Commodore John Barry (1745-1803). Born in County Wexford, Ireland, in 1745, John Barry was appointed a Captain in the Continental Navy 7 December 1775. He commanded Lexington and Alliance during the Revolutionary War. He was seriously wounded 29 May 1781, while in command of the Alliance during her capture of the British ships HMS Atalanta and HMS Trespassy. Appointed Senior Captain upon the establishment of the US Navy subsequent to the ratification of the US Constitution in 1788, Captain Barry commanded the frigate United States in the Quasi-War with France. Commodore Barry died on 13 September 1803, at Strawberry Hill near Philadelphia, Pennsylvania.
She was on the Clyde for Joint Warrior 2010.
Posted by Gerard Ward at 00:02