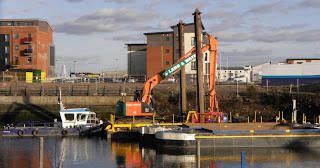 Renfrew Harbour known locally as the "Pudzeoch "as the stream of the same name flows into the clyde at this point.

The harbour has not been used for some time, at one time steamers used the harbour as a calling point for their down river cruises.

Renfrewshire council are filling the end of the basin in,in order to construct a pump station as part of a flood prevention scheme in the area.