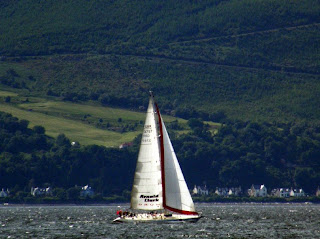 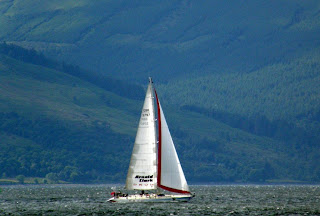 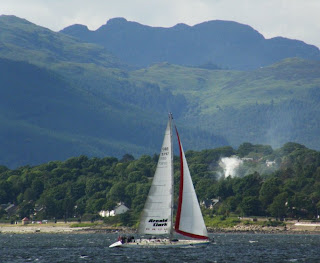 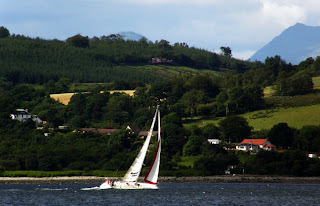 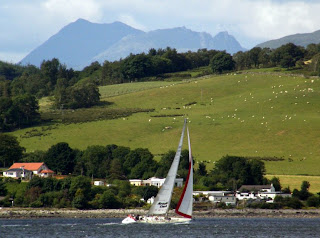 Drum is a boat with a very interesting history.
The 78 foot, Maxi racing yacht was designed
by Ron Holland in 1985, and built by Vision Yachts of Cowes, for top racer Skip Novak.


She was originally commissioned by Simon Le Bon, lead singer of Duran Duran with the purpose of taking part in the 1985 Whitbread Round the World Yacht Race.

On August 10th 1985, to assist with crew training and to test the boats equipment in advance of the Whitbread Race, they entered the Fastnet Race which is a 608 round mile trip from the Isle of Wight to Plymouth.

However, during this race they encountered serious gale force weather conditions which caused the 14-ton keel to fall off, capsizing the yacht with all 24 crew members still onboard.

Thankfully another yacht Carat competing in the race witnessed the capsize, raised the alarm and they were able to scramble a helicopter. The Royal National Lifeboat Institute assisted with the dramatic rescue operation resulting, thankfully, with no casualties and no one being seriously injured. The team only had one month to get the boat back to racing form; salvaging her, fitting a new keel, mast and sails, and replacing all electrical systems.

Drum successfully competed in the 1985/86 Whitbread Round the World Yacht Race, scoring 3rd overall. Because of her history, and being the only British Maxi, she generated huge publicity with more than 10,000 spectator boats turning out to welcome them back to Britain.

In 1988 Drum was bought from Simon Le Bon by Scottish businessman Sir Arnold Clark, and was to be his fourth racing boat. Over the next few years Sir Arnold competed in UK inshore and offshore races winning trophies at Cowes Week and Scottish Series whilst winning offshore classics like the Round Ireland Race. He was also known to sail on Drum extensively with his family.

As Arnold Clark Automobiles grew, Sir Arnold found himself with less time to spend aboard Drum so the boat started being used for more corporate charter days allowing more people to participate in the ultimate experience - sailing a Maxi class race boat.

In 2005, Sir Arnold kindly agreed to loan the yacht to Le Bon and his crew to become the primary sponsor when he heard about their plans for Drum to race again raising awareness of the Royal National Lifeboat Institution. Simon Le Bon and the original Whitbread Round the World crew planned to compete in the Fastnet race to mark the 20th anniversary of their fated 1985 Fastnet capsize and to complete some ‘unfinished business'. They were hampered by light winds the whole race but eventually managed to complete the course without incident raising money for the RNLI as a thank for rescuing them all those years ago.

Today Drum sails every day of the summer months introducing new people to the exciting world of big boat sailing.

Thanks to Sir Arnold Clark for the information.

Email ThisBlogThis!Share to TwitterShare to FacebookShare to Pinterest
Labels: Yacht